Chakras were first documented in the ancient Hindu text of knowledge, the Vedas. The term Chakra comes from the Sanskrit word meaning “wheel”. Chakras are also described as padmas (lotuses).

When visualising chakras it may be useful to perceive or experience them as spinning vortices of energy spiralling through the body from front to back-like little whirlpools, or their lotus as depicted on the relevant yantra.

When we speak about the position of chakras within the self we enter the realms of subtle anatomy-the pranic sheath or layer. In Sanskrit this layer is called Pranamaya kosha.

Yoga anatomy recognises that the pranamaya kosha has a system of nadis, or energy channels-some 72,000!  Nadi means current or flow.

The channels can  become “blocked” or sluggish, which can then be perceived physically or mentally as illness. In a similar way traditional Chinese medicine recognises energy as chi, running through meridians.

Where there is a big convergence of several energy channels, a chakra is created and these, too, can become “blocked” creating an imbalance in physical, mental or emotional health and ultimately spiritual health.

Animals are also recognised to have a also pranic layer or sheath.

There are 3 major nadis within pranamaya kosha:

Sushumna can be perceived as running parallel to the spinal cord, which is an extension of the brain. It is at certain points along Sushumna nadi that the chakras lie.

It is generally recognised that there are 7 major chakras or energy centres, however there are many more than this, which are less well known.

Five of the major chakras relate to both a sense and an element. All have a mantra-a bija-or seed mantra, an animal, a god or goddess, a colour, a lotus flower and a yantra,

A yantra is a geometric, sacred illustration. They are all ways of aiding concentration and focus.

Over the evolution of time various traditions, even within yoga, will have some variations in their visualisations and representations of energy centres so the following is to be taken as a guide.

The following is the second in a series of 3 blogs about Chakras: 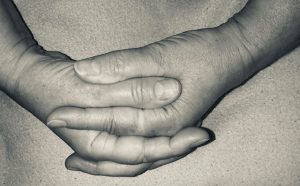 This chakra is strongly associated with the element of water and therefore closely aligned to the Moon and its influence of tides as well as menstruation and even all the fluids in the body. For example, blood, lymph, semen, saliva and tears.

It can be visualised as level with the pubic bone, within Sushumna nadi.

It is also related to the sense of taste. We use the term “mouth watering” and it is this watery element which produces saliva and makes this possible.

It may be visualised as a crimson lotus flower with 6 petals. Within the lotus is a crescent moon. The animal is a crocodile The deity is Vishnu-the creator, Rakini is the consort. and she controls the body’s blood element.

The chakra is related to the sex organs, kidneys and bladder

Swadishana is said to be the seat of the unconscious mind, storing samskaras ( past life memory traces) and ancestral memories.

Imbalances here are manifested as over indulgence in sense pleasures; addictions and escaping into fantasy worlds;  difficulties around forming intimate relationships. Menstruation challenges such as painful; heavy; absent, irregular periods are another indication.

Also, any hardening or drying-out diseases, such as arthritis.

Often, tension in the hips and glutes and the inability to “let go” in these areas may also indicate an imbalance here. Sometimes fear can be locked here as a result of trauma, physical or emotional.

The following are merely selections or suggestions. There are several other options:

Paschimottanasana: One of the oldest known yogasanas. “A stretch for the West side of the body”- Or, the back of the body-that which faces away from the rising sun (the East side).

Swadisthana chakra is our centre of both sexuality & creativity. This mudra helps direct sexual energy towards anahata chakra; harmonises the endocrine system and enhances mental alertness.

Vam (Vaaam). Can be repeated aloud, in a whisper or mentally, with awareness at Swadisthana chakra.

In an upright seated position or lying in Savasana visualize a 6 petalled crimson lotus flower with 6 petals, located behind the pubic bone and in front of the spine, which open on each inhale and close on each exhale.

Visualise waves on the ocean under the light of the full moon.

Waking up from Winter

We use cookies on our website to give you the most relevant experience by remembering your preferences and repeat visits. By clicking “Accept”, you consent to the use of ALL the cookies.
Cookie settingsACCEPT
Manage consent

This website uses cookies to improve your experience while you navigate through the website. Out of these, the cookies that are categorized as necessary are stored on your browser as they are essential for the working of basic functionalities of the website. We also use third-party cookies that help us analyze and understand how you use this website. These cookies will be stored in your browser only with your consent. You also have the option to opt-out of these cookies. But opting out of some of these cookies may affect your browsing experience.
Necessary Always Enabled
Necessary cookies are absolutely essential for the website to function properly. These cookies ensure basic functionalities and security features of the website, anonymously.
Functional
Functional cookies help to perform certain functionalities like sharing the content of the website on social media platforms, collect feedbacks, and other third-party features.
Performance
Performance cookies are used to understand and analyze the key performance indexes of the website which helps in delivering a better user experience for the visitors.
Analytics
Analytical cookies are used to understand how visitors interact with the website. These cookies help provide information on metrics the number of visitors, bounce rate, traffic source, etc.
Advertisement
Advertisement cookies are used to provide visitors with relevant ads and marketing campaigns. These cookies track visitors across websites and collect information to provide customized ads.
Others
Other uncategorized cookies are those that are being analyzed and have not been classified into a category as yet.
SAVE & ACCEPT