Chakras were first documented in the ancient Hindu text of knowledge, the Vedas. The term Chakra comes from the Sanskrit word meaning “wheel”. Chakras are also described as padmas (lotuses).

When visualising chakras it may be useful to perceive or experience them as spinning vortices of energy spiralling through the body from front to back-like little whirlpools, or their lotus as depicted on the relevant yantra.

When we speak about the position of chakras within the self we enter the realms of subtle anatomy-the pranic sheath or layer. In Sanskrit this layer is called Pranamaya kosha.

Yoga anatomy recognises that the pranamaya kosha has a system of nadis, or energy channels-some 72,000!  Nadi means current or flow.

The channels can  become “blocked” or sluggish, which can then be perceived physically or mentally as illness. In a similar way traditional Chinese medicine recognises energy as chi, running through meridians.

Where there is a big convergence of several energy channels, a chakra is created and these, too, can become “blocked” creating an imbalance in physical, mental or emotional health and ultimately spiritual health.

Animals are also recognised to have a also pranic layer or sheath.

There are 3 major nadis within pranamaya kosha:

Sushumna can be perceived as running parallel to the spinal cord, which is an extension of the brain. It is at certain points along Sushumna nadi that the chakras lie.

It is generally recognised that there are 7 major chakras or energy centres, however there are many more than this, which are less well known.

Five of the major chakras relate to both a sense and an element. All have a mantra-a bija-or seed mantra, an animal, a god or goddess, a colour, a lotus flower and a yantra,

A yantra is a geometric, sacred illustration. They are all ways of aiding concentration and focus.

Over the evolution of time various traditions, even within yoga, will have some variations in their visualisations and representations of energy centres so the following is to be taken as a guide.

The following is the first in a series of 3 blogs about Chakras:

This chakra is associated with the element of fire-often known as the fire centre-and, as such, like a jewel, it can radiate your own inner light and vitality.

It can be visualised as being behind the navel, along Sushumna nadi (see above).

This chakra is also associated with the sense of sight. We can see much better when in the light and natural light comes from the sun or fire. The location of the chakra is level with the point in the physical body also referred to as the “solar” (sun) plexus, in the centre of the body. The centre of gravity.

A representation of the chakra is as a bright yellow lotus with 10 petals. In the centre is a red triangle as well as its bija mantra, which is Ram. (Raang)

The animal, ram, is associated with this chakra-strong emotions, which may block clear sight.

The deities are Vishnu-preserver of life and Laksmi.

The solar plexus region is also concerned, on a physical level, with digestion and assimilation of food-the transformation of food into energy.

It is particularly related to the pancreas gland, as well as other abdominal organs, namely the gall bladder, liver, spleen, stomach and intestines, with the production of gastric juices and enzymes, which play such a role in absorption, digestion and assimilation of food.

Yet we need also look at absorption, digestion & assimilation on a mental/emotional level; of information, situations or events. And whether we have created them or if they seem to have been foisted on us. And how we process and manage these changes & transformations in our lives.

Manipura is concerned with self- esteem, self- sovereignty, self- confidence, or the lack of them. Will, dominance, ambition, power, assertiveness and how to balance these aspects in a healthy way so that it is neither destructive to others nor merely self- serving. Anger management can be seen as a feature of Manipura chakra.

The qualities of expansiveness, joviality and “get up and go” or having “fire in the belly” are also associated with the vibration of this chakra.

The following are merely selections or suggestions. There are several other options:

Tips; Feet are wider than hip width, yet maintaining a steady, stable stance. Toes, knee, thigh all facing the same way Palms up or down, Gazing beyond the fingers of the leading arm, leading knee bent level with or behind the knee, never beyond, knee in same direction as ankle, never turned inwards

Feet (base) is strong in this standing pose. A suggestion is to embody the qualities of a battling warrior. What do we need to equip us for the challenges we may face-endurance? Inner strength? Patience? What else?

Visualise drawing energy up through the back foot from the Earth on the inhale to the crown of the head and exhaling it into Manipura chakra to build up reserves of vitality, resolve, inner power. 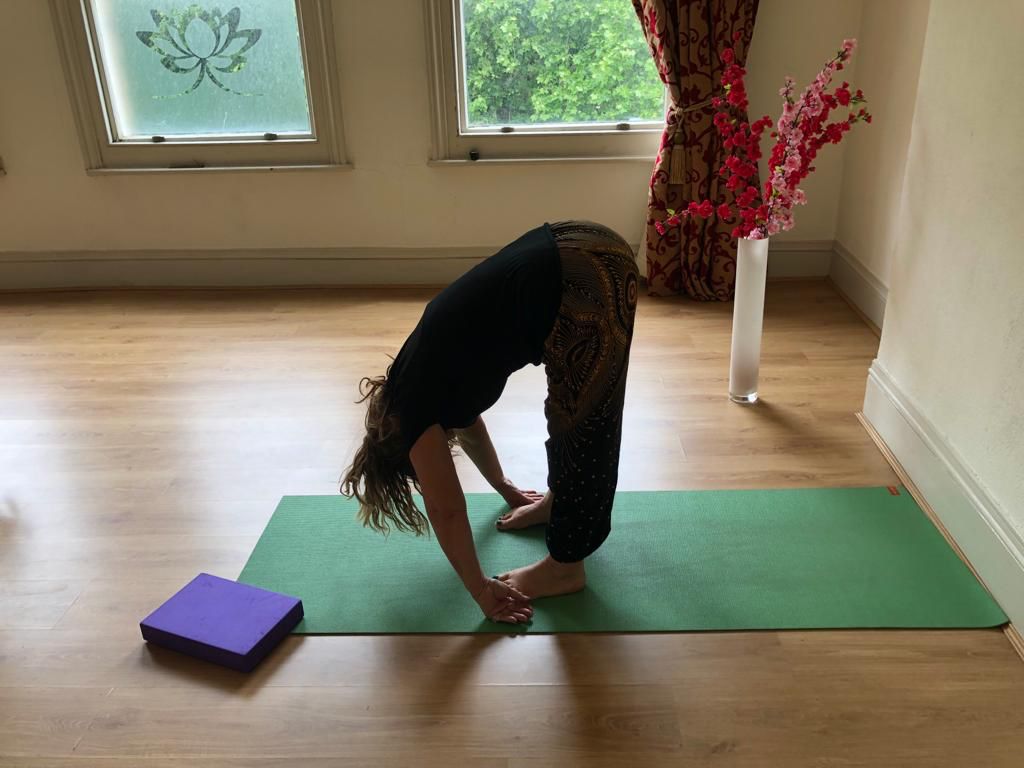 Tips; Start from prone with hands either side of head, fingers at eye level, elbows down.

In posture- feel fingers lengthen, send weight through elbows into the earth, no weight in hands, elbows either level with or in front of shoulders, lift chest from the ground. 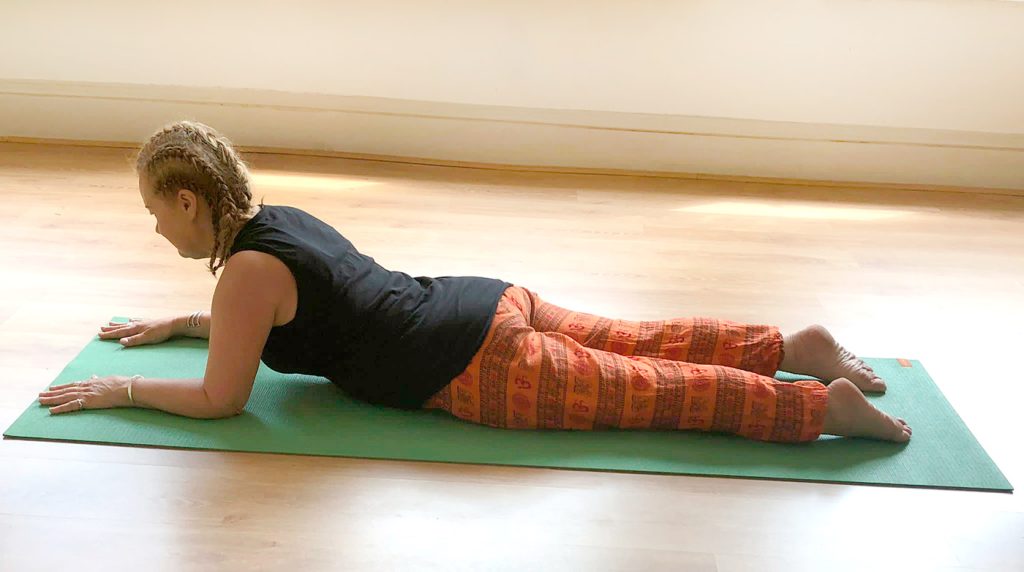 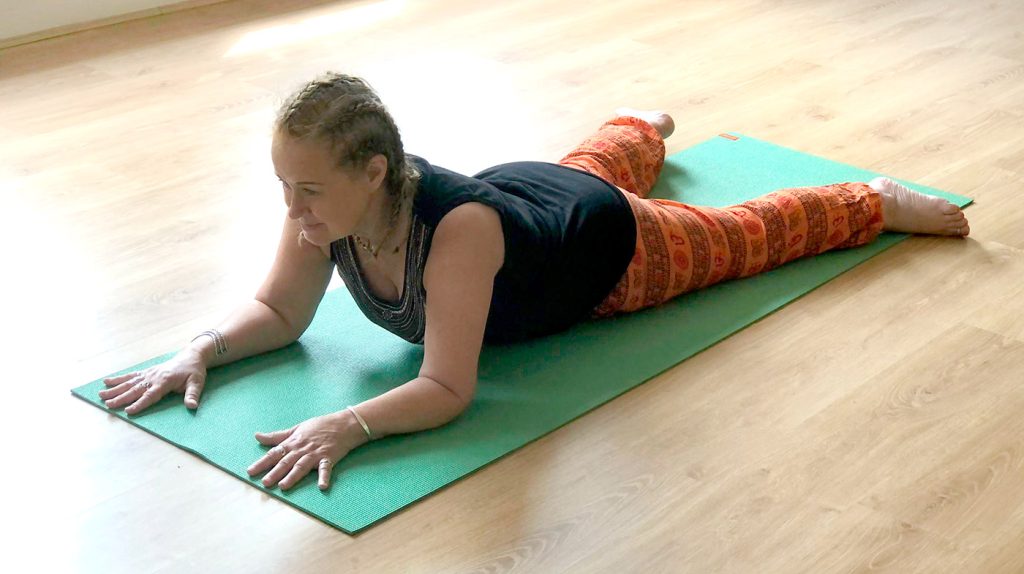 If this doesn’t ease lumbar pain then do not stay in posture, go into child pose instead – see photo below:

Imagine healing blue light drawn in with inhale. Exhale into lumbar, kidneys and adrenals, flooding them with vitality. 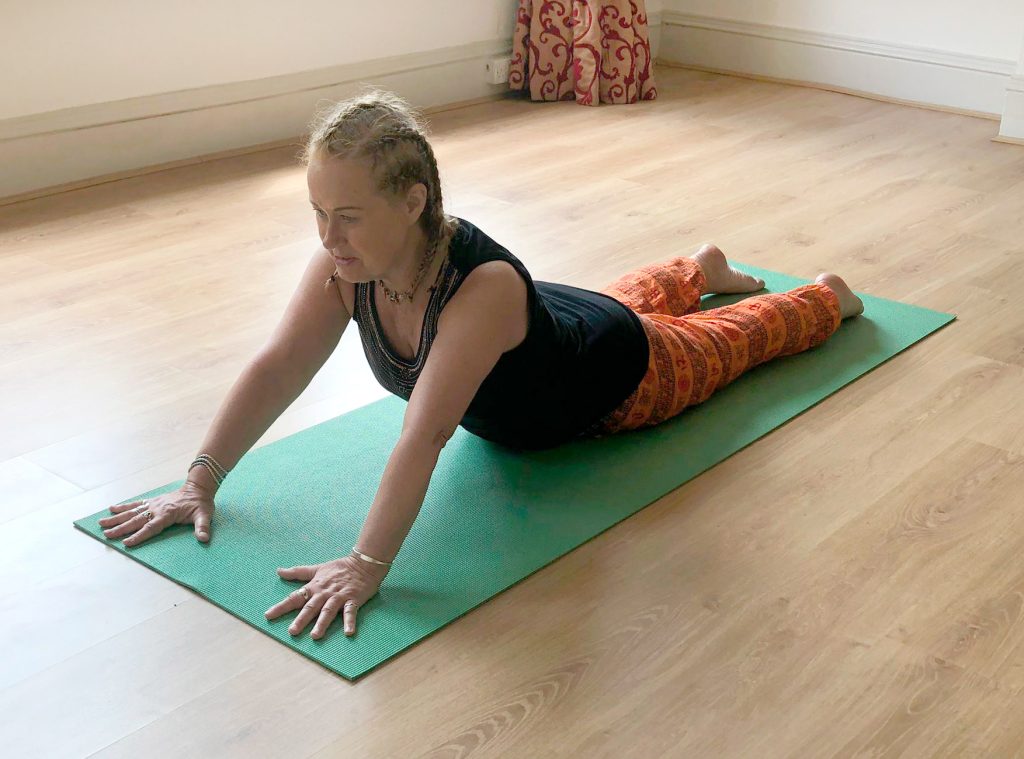 In this version extend into from previous posture. Push up into hands so arms straighten. Pubis remains on floor, fingers & palms are wide, long & flat. Care with lumbar. Return to Sphinx if Cobra aggravates. Hands can be moved towards body for deeper practice. Breathing as before. 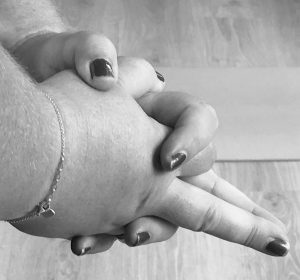 Link fingers in front of the solar plexus. Straighten out each middle finger & rest against each other and pointing forwards. Draw breath awareness into solar plexus. Said to aid digestion and stimulate inner fire, liver & kidney energies.

Waking up from Winter

We use cookies on our website to give you the most relevant experience by remembering your preferences and repeat visits. By clicking “Accept”, you consent to the use of ALL the cookies.
Cookie settingsACCEPT
Manage consent

This website uses cookies to improve your experience while you navigate through the website. Out of these, the cookies that are categorized as necessary are stored on your browser as they are essential for the working of basic functionalities of the website. We also use third-party cookies that help us analyze and understand how you use this website. These cookies will be stored in your browser only with your consent. You also have the option to opt-out of these cookies. But opting out of some of these cookies may affect your browsing experience.
Necessary Always Enabled
Necessary cookies are absolutely essential for the website to function properly. These cookies ensure basic functionalities and security features of the website, anonymously.
Functional
Functional cookies help to perform certain functionalities like sharing the content of the website on social media platforms, collect feedbacks, and other third-party features.
Performance
Performance cookies are used to understand and analyze the key performance indexes of the website which helps in delivering a better user experience for the visitors.
Analytics
Analytical cookies are used to understand how visitors interact with the website. These cookies help provide information on metrics the number of visitors, bounce rate, traffic source, etc.
Advertisement
Advertisement cookies are used to provide visitors with relevant ads and marketing campaigns. These cookies track visitors across websites and collect information to provide customized ads.
Others
Other uncategorized cookies are those that are being analyzed and have not been classified into a category as yet.
SAVE & ACCEPT